It’s important for Steve, one of our main guides this trip, to catch The Tragically Hip’s last concert streaming live over the airwaves tonight. For this, we decide to park-it in Smithers this evening, a northern town in British Columbia about halfway between Prince George and Prince Rupert (it is perfectly freckled with small bodies of water. One of them, Seymore Lake, I make sure to take a swim in before later stuffing my face with pizza).

Before we arrive, Steve thinks (or doesn’t think) it’s wise to take his Toyota Tacoma through the ditch as a way to express his pure excitement.

“Four-wheel drive engages!” he says, as a form of defense to the laughing critiques as we’ve just nearly broken down one of two vehicles on day two of the journey.

“Ya, and maybe even before your brain!” I am quick to cheekily respond from the back.

But as I let go of my own brain in a crowded Boston Pizza later on, I am overwhelmed by a realization quite literally flashing on every screen before my eyes.

In front of me, I see a crying Gord Downie on stage celebrating one of his most monumental moments of life as a musician who has publically announced he is dying of brain cancer. To my right plays the Olympics. So many phenomenal athletes. To the left, Ultimate Fighting Championships (UFC). Together, as a group, I take note of all of our own varied talents, coming from all over the world. 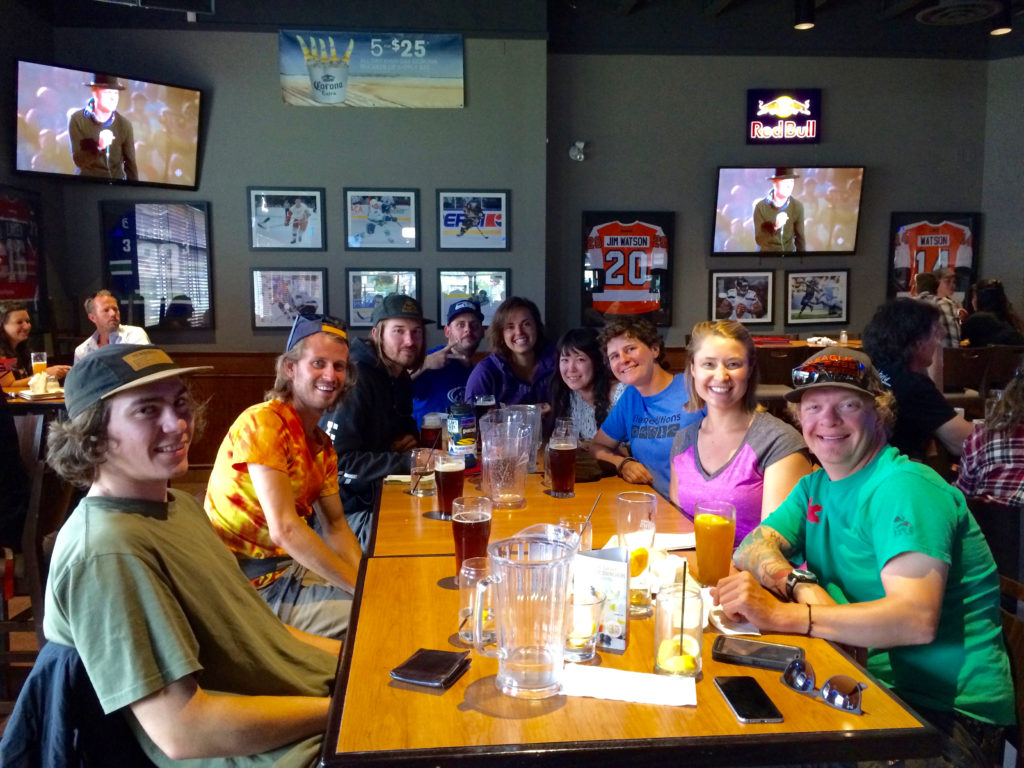 To name a few, Steve, a Canadian you’ll soon learn more about, has spent nearly his entire life as a devoutly qualified adventure guide. Jon and Alexa, also Canadian, are both geologists. Jon is also a photographer; Alexa has prepared absolutely all of the food travelling with us on the trip. Laura, UK, I am starting to uncover is a “Jill of all trades.” (I am pretty sure she uses a website name somewhere along these lines). From studying psychology, being a police officer, speaking multiple languages, building websites, driving motorcycles, being the youngest of five… she is now in Canada working with Flexpeditions to certify as a climbing coach. Jack, another UK-er, started travelling the world as an up and coming adventure guide at the ripe ol’ age of 18-years-old. He is now one of our most experienced crew members. Barry and Kaoli have proven to transcend boarders being able co-exist by bringing people together no matter where they are in the world. Kaoli is a talented Japanese artist. Barry, holding degrees in environmental studies and business, is now leading treks in various Canadian provinces. This trip, he acts as our leader.

As for me, well, I’m pretty honoured to be a reflection of the group that sits with me here tonight. As diehard storyteller and dancing therapist coach, I keep things light and fluffy, not at all afraid to get real close with people I have only just met…

Which, whether we know it or not, is precisely what we are all doing here right now. And are about to drop in just a little bit deeper…

As Gord Downie’s show comes to a close, a weeping Steve at the head of the table is quick to poke fun at the fact that now he has almost broken down. In typical Steve fashion, he sheds light on his shedding tears by poking fun at himself.

[Insert one of many “in need of momma” jokes here]

“I feel like someone is missing,” a statement made various points of the journey.

We then head home to our single-room motel rental for the evening. It’s about to sleep all eight of us for the night (our ninth has yet to join us).

As I get snuggly in a shared bed, I give thanks for growing closer with the “strangers” surrounding me. In trust, I am comforted by how the Hip thing to do right now is to lay here in vulnerability acting simply as…

Everyone’s got their own, little talents. It’s just a matter of relaxing into it all, letting it naturally unfold.

Here’s to Gord Downie for allowing us to shed a tear. And the need for some layers…